The Imo State Police Command has arrested two gunmen who are alleged to be among the unknown gunmen causing crisis in the state in recent times.

The two suspects are identified as Godwin Danladu and Bamaiyi Gada, according to Igbere TV, as the police confirmed that its operatives recovered an AK-47 rifle from the suspects.

The two men, who hail from the North-West region, were also nabbed with military uniforms. 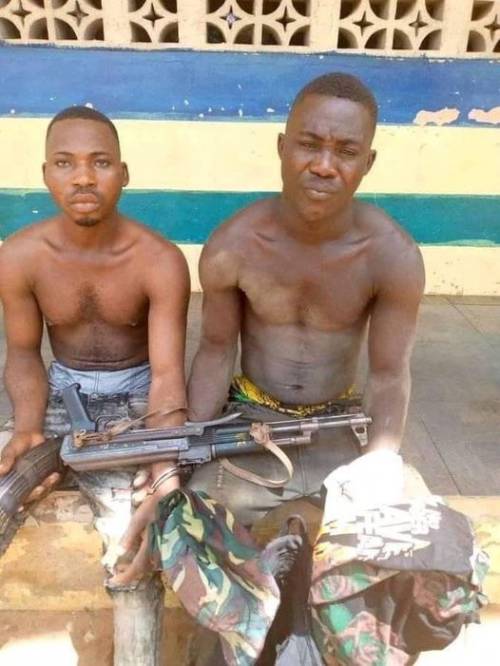 Imo State with adjoining South-East states have been at the centre of violence for months following unprovoked gunmen attacks on police and other security establishments which have led to confusion in the region.

SaharaReporters had on May 3 reported that policemen deployed to the South-East states were deserting their stations, and now preferred to go to work in mufti due to the pervading attacks.

It had been reported that most policemen, particularly those who are not Igbo indigenes, are desperately seeking redeployments amidst fear of the incessant attacks by “unknown gunmen.”

SaharaReporters had on April 19 reported that most policemen in Abia wear mufti, after heavily armed men attacked Uzuakoli Police Station in the Bende Local Government Area in a string of other attacks on other stations.

Investigations revealed that the officers are seeking to be deployed to investigating units such as the Special Fraud Unit (SFU), Inspector General of Police (IGP) Monitoring Unit, and special Squad.

It was also learnt that the affected personnel are currently meeting with their contacts within and outside the state and are willing to pay for their redeployment to be granted due to the fear of unknown gunmen.

While some senior officers believe that the officers should remain in the state to tackle the insecurity, others have already reached out to the police high command in a bid to facilitate the deployment.

Some of the officers also based their request on the need to be reunited with members of their families.

Eid-El-Fitr: Over 3,200 Police Personnel Deployed To Imo As Tension Increases

Breaking: Man Who Trekked For President Buhari In 2015 Has Been Abducted By Bandits