A Catholic Priest has reportedly revealed that he no longer says the special prayer offered for Nigeria during Sunday mass.

A Nigerian Twitter user narrated how their new Parish Priest stopped them from saying “Prayer For Nigeria In Distress” which was created by the Head of the catholic church in Nigeria in order to seek God’s intervention in Nigeria amid increasing challenges.

The tweep with handle @fopara03 disclosed that the very first day the Reverend Father stepped into the church, he informed them that there will be no such prayers in the church. He went on to tell the parishioners that they’re free to report him if they want.

@fopara03 wrote; ”Our Parish Priest made it clear to parishioners on the day he arrived

He said, “You see that prayer, “Prayer for Nigeria In Distress”, I’ve stopped saying it and I won’t be saying it here, if you like, go an report me to the Archbishop”. 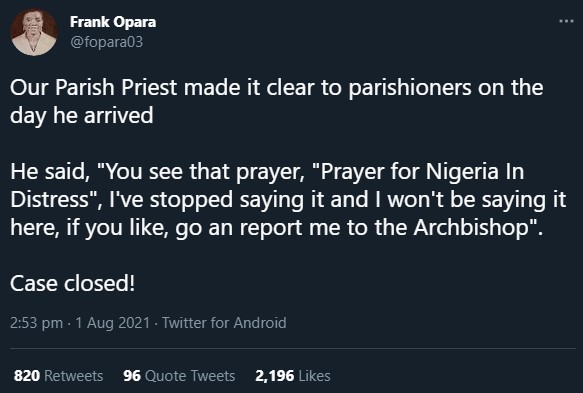 Below is the video of another Catholic priest who said that Nigeria has expired since 2014: