Recall that the U.S. men’s basketball team lost to Nigeria in its first pre-Olympic exhibition game. It was also the team’s first defeat to an African nation. The landmark victory came nine years after the U.S. shellacked Nigeria 156-73 at the London Olympics, the U.S.’ biggest blowout in Olympic men’s basketball history.

Reacting to big win over the weekend, Okey Bakassi said he came across the news while searching for what will brighten up his mood following news of veteran singer, Sound Sultan’s death.

Noting that the victory was the first of its kind, he added that everything is possible when the best team is used for a job. He described the players as “Ndi dot” and further spoke against the quota system in his hashtags. He also revealed that Sound Sultan loved basketball.

Okey Bakassi wrote; Just searching for something to brighten my mood today, after news of the passing of my dear friend broke….then I saw this first of its kind victory. Whoever thought Team Nigeria can beat Team USA in a #basketball game. It’s possible when we use the best team for the job…. #noquotasystem #notribalconsideration #nozoning #puretalent #merit #excellence #ndidot #wakeupnigeria

This is for you @soundsultan you loved #basketball RIP 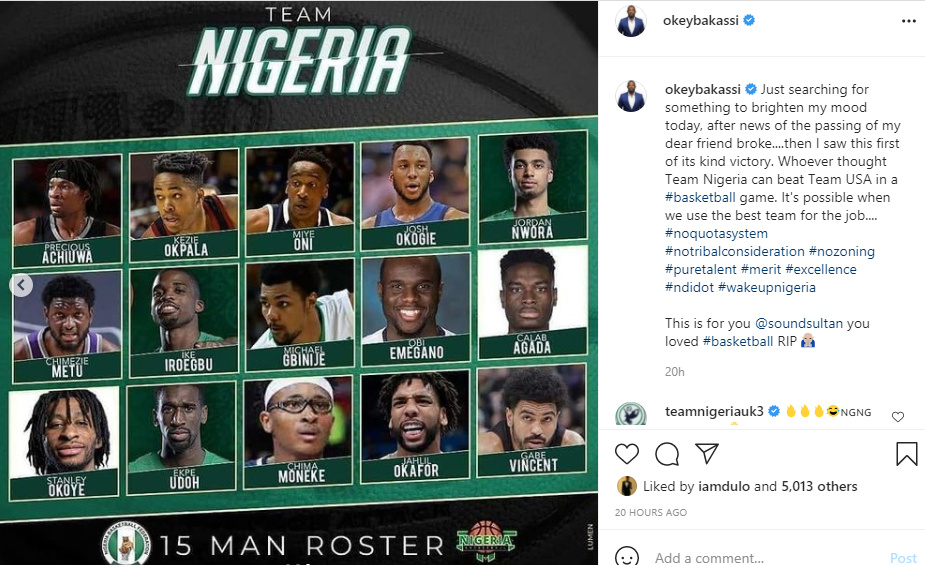