The Women in Akwa Ibom State on Wednesday were seen in black attire moving en masse to the government house, seeking justice for Umoren and other women who have been victims of gender-based violence.

They also carried placards bearing different inscriptions which read, ‘Akwa Ibom State Women demand justice for Iniobong, Esther, Glory and other victims of sexual-based violence’, ‘Don’t just say rest in peace, help women live in peace’, ‘My no means no’, ‘If Abel’s blood cried to God, Iniobong’s blood too cries to God for vengeance, beyond justice’, ‘My body, my rules, ‘Rape brings trauma’ among others. 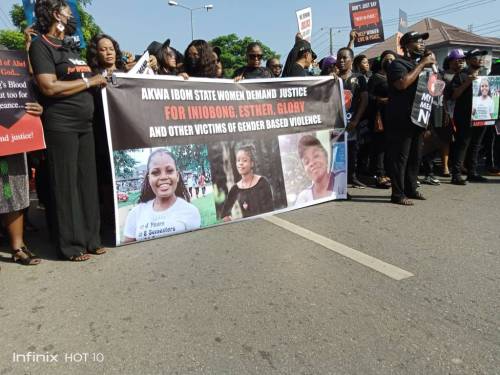 It all started after, the 26-year-old graduate of the university, who was also an orphan, had dropped a tweet on her handle last Tuesday seeking a job.

She wrote, “#AkwaIbomTwitter please I’m really in need of a job, something to do to keep mind and soul together while contributing dutifully to the organisation. My location is Uyo, I’m creative, really good at thinking critically and most importantly a fast learner. CV available on request.”

She was allegedly invited by a young man, Frank Ezekiel Akpan, suspected to have kidnapped her as she could not be reached on her mobile line.

This was confirmed by the Police Public Relations Officer, Odiko MacDon, in a statement confirming the incident and the subsequent arrest of the suspect, Frank Akpan to newsmen on Sunday. He said the culprit confessed to the crime.