South African music star, Moonchild Sanelly who is known to be passionate about stirring up conversations about “uncomfortable” topics, is on it again.

“Can bisexual men just own it! Because lies are very saddening! I don’t know if you know that there’s plenty of girls who love to have fun with bisexual boys coz’ straight boys be straight up unskilled with some sex things!

READ:  I can assure that any p***y without an odour, is not original’ – Nigerian lady, say

Moonchild’s opinions definitely ruffled more than a few feathers. One tweep hit back at the star, saying she has been hitting up the wrong straight men.

READ:  Better relationship they start from bike – Ladies react after spotting a handsome guy using Okada to take his babe out (Video)

She however defended herself by saying “No”, but she knows there are women who don’t get taught to say what they want. See the exchange below; 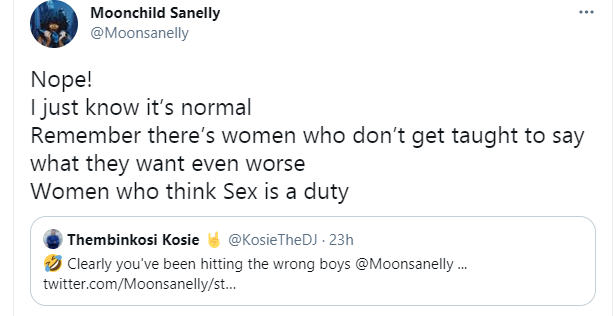