A bear suddenly attacked a pregnant trainer in a Russian circus in the presence of terrified screaming children and their parents.

The terrifying ordeal started during an act in the ring involving two bears and two trainers at a crowded circus.

The pregnant trainer was doing her job when the brown bear tackled her to the ground.

Two men quickly intervened and fought with the animal to pull it clear.

A witness said the male bear did not back off despite multiple “blows with a whip”.

The injured trainer suffered bruises and cuts but thankfully her unborn child was not harmed.

She claimed that the bear could have attacked her because she was pregnant.

READ:  Tension As Pregnant Woman Dies Inside A Public Bus In Onitsha, Do you know her? (photo)

The bloodied circus performer was rushed to hospital after the horrifying incident in the city of Oryol, in western Russia. 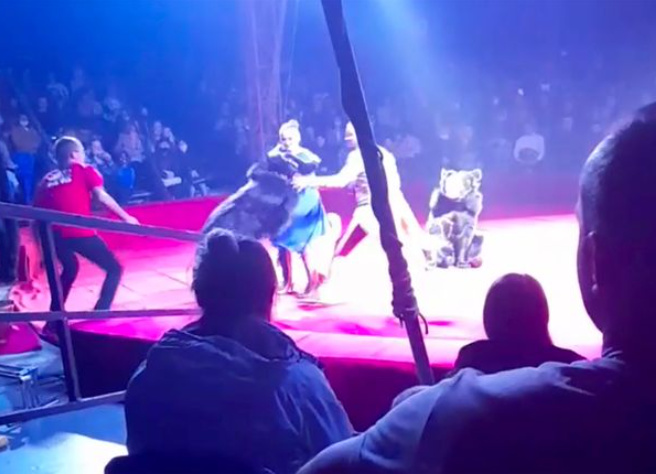 “I literally have two scratches and a slight bruise on my leg,” she said.

“With the animal, too, everything is fine, and my baby, all is normal.”

The unnamed trainer added: “Perhaps it was jealousy to some extent, since I am pregnant. There can be many nuances. 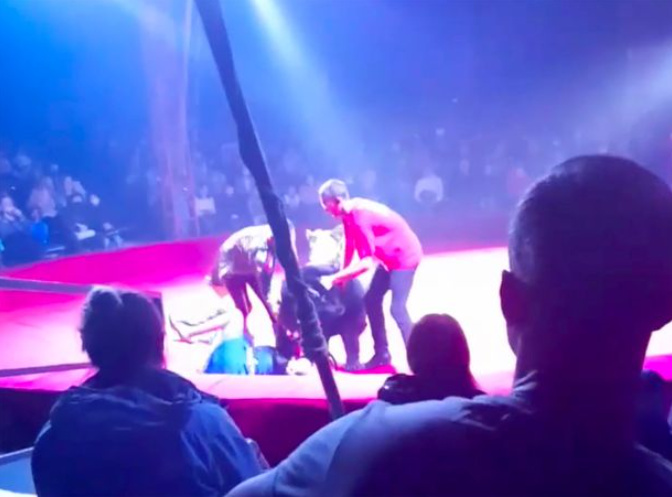 The bear who attacked the woman has now been barred from performances and it is unclear when or if it will return.

The Russian Investigative Committee has launched a probe into the incident.

READ:  Mother and her Jss3 Son killed by suspected Fulani herdsmen in Benue

“The investigation is undertaking a set of measures to establish all the circumstances of the incident, interviewing circus employees, and witnesses,” said a source.

There have been several shocking circus animal incidents over the past few months.

Irina Novozhilova, of animal rights group VITA, has called for the ban of all circuses with live animals, which remain a popular attraction across Russia.

“No circus conditions will be humane for one simple reason,” she said.

“Training goes hand in hand with cruelty. Circuses are always cruel beyond limits.

“And circuses with animals should be banned.”

The use of animals in UK circuses are banned.

Tension As Pregnant Woman Dies Inside A Public Bus In Onitsha, Do you know her? (photo)

A Pregnant Woman has dies in a Bus heading to Onitsha. According to Gifted Joseph, […]